Do All Men Make You Mad? (FemiType #5: The Bitter Woman) 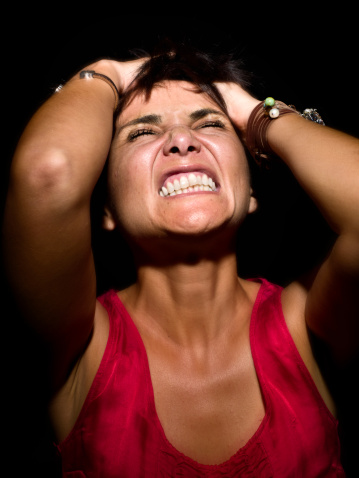 In an effort to help you understand the man side of this mature dating experience, I’ve introduced you to The Princess, The 18 Year Old, The Scaredy Cat and The Wow-Me Woman: all FemiTypes* that send good men running.

Today I’m going to talk about perhaps the most challenging of all FemiTypes: The Bitter Woman. She is a little scary, a lot angry, and all about being a victim. Not only does she scare and briefly traumatize the men she meets, but her bitterness probably seeps into all areas of her life.

So buckle your seat belts; this may get a bit bumpy. The good news is that you will probably not recognize yourself here – though I’ll bet you have a friend or someone else in your life who is The Bitter Woman. (These are not women to talk to about your search for love, btw.)

Who hasn’t had periods of feeling bitter? Whether you’ve been passed over for a promotion, had a crappy childhood, or had a man do you wrong, by this time in your life you’ve taken a fair share of hits.

A grownup woman accepts that life does not always go her way. The Bitter Woman does not. She marinates in her victimhood and anger, making most anyone who crosses her path pay for her disappointment. (Especially the men.)

Not coincidentally, The Bitter Woman constantly meets bad men who piss her off. She may start with “He’s great!”, but she will always get to “He’s a total asshole.” When it ends (and it always does), she is even more convinced that all men are jerks. Her toxic anger then reignites, and she is ready for the next target.

When it comes to assigning blame for her crappy love life, she is all about pointing fingers and never about looking in the mirror. It doesn’t occur to her that the lack of a great relationship in her life has anything to do with her. It’s all about lousy men and bad luck.

“I actually met her in the grocery store. She was attractive and I liked her spunk, so I asked for her phone number. We had a good phone conversation, and at the end I suggested we meet for coffee. She said something like “Oh…you don’t take women you meet in grocery stores to dinner?” I told her I thought coffee would be a good start, and if we wanted to we could move on to dinner.

I could tell within minutes after we met that she had a chip on her shoulder about me not taking her to dinner. She made a couple of snarky comments about it. And the rest of the time she was bashing her first husband and all her online dating experiences. I couldn’t get out of there fast enough! And then she had the nerve to email me wondering when we were going out to dinner. She was scary. I can’t imagine any guy making that woman happy.”

Perry was a nice enough guy. He was making an effort to get to know her. She knew next to nothing about him yet was already assuming he was a cheapskate or a jerk…and he knew it. I’m guessing that she was telling herself something like “here we go again…another one just like the rest.”

He was put off by her demanding, negative attitude and then relieved when he escaped before dinner. In the end he feels he dodged a bullet…and he did.

The Bitter Woman has created this hard shell that protects a wounded heart. Her irony is that she just wants someone to love and accept her. (Don’t we all?) But she is the least willing of all the FemiTypes to reciprocate that open acceptance.

She feels damaged by the men in her life. She may have had a nasty divorce, a cheating spouse or boyfriend, or a messed up relationship with her father. (You don’t need to be a psychologist to figure this as a possibility.)

Whether it was one man or many, she hangs on the experiences and uses her anger like a protective shield. That use of blame prevents her from taking responsibility for the relationships in her life, especially with men. She is afraid, but anger is her go-to emotion rather than dealing with what she’s really feeling: fear, insecurity, sadness, etc.

The Bitter Woman careens between self-pity and self-righteousness. She says things like “Those jerks never even give me a chance!, the unsaid being: So there’s nothing I can do about it!

Her self-righteousness comes out as bullying: “What…dinner isn’t good enough for me? Are you cheap or something?” And voila! She creates her own negative reality. (Is anyone having fun yet?)

I admit that The Bitter Woman is challenging. Her transformation begins with taking an honest, sometimes painful look in the mirror. Seeing and accepting that she is the common denominator in all her bad relationships is her first step toward freedom. (If you’ve read my eBook, you know that this was an epiphany that changed my life forever.)

Another part of the journey is uncovering your beliefs and assumptions about men, mature dating and relationships. Men are only interested in sex. Relationships mean giving up your dreams. Men don’t want a woman like me. All the good men are taken. My man has to be/has to do xyz or he doesn’t really care. Dating is scary and you have to protect yourself. Go on…write it all down.

Next, start to validate your beliefs. You have a choice: focus on the guy(s) who did you wrong (at least that how it looks now) and assume they’re all like that OR start gathering new evidence.

Look for the good men around you. Maybe it’s your brother, neighbor, best friend’s husband, chiropractor or co-worker. I’ve never met a woman who couldn’t identify some men in her orbit who were kind and a good partner to someone. Are there really NO good men? Anywhere? Really? And look at their partners. Is it true men don’t pick women like you?

This is part of the work we during Step 3 of my 6-Step Find Hope and then Find Him System: I’m Fabulous So What’s the Damn Problem? We uncover your negative patterns and deep beliefs that have been guiding your interaction with men…probably for a very, very long time.

What you Believe is your Truth. If you see any Bitter Woman in you, you can choose to take personal responsibility for creating your new truth.

I know, because I did this work myself. It took some serious work for me to get past my “Men Are” nonsense. This was stuff I had believed since junior high school. And when I exorcised those demons, all of the sudden I saw good men all around me.

Eventually the One was right in front of me. The old me would have scared him away. The new me attracted him like a magnet. Score!

Thankfully, the vast majority of you rockin’ ladies take your lumps in life graciously. You’ve had your share of disappointments and hurt with men, but you don’t hang on like The Bitter Woman. You know it’s okay to get pissed off, vent for a while, and have a pity party.

Eventually, though, you move on with hope, determination and an open heart. That is the way to find meaningful and lasting love – and peace of mind.

I know this is possible for you: a devoted man, a peaceful heart, and some sweetness in your life every day.