Are you just a little (or a lot) scared of dating? Or maybe of actually entering into a relationship? You’re NOT alone!

I’ve been helping women over 40 find passionate, grownup love since I became a first-time bride in 2006. When these smart, independent, accomplished women come to me for support, almost 100% admit that they are scared of dating.

(That’s after they deny for some that they have any fear. It’s hard to admit. I know it was for me.)

Interestingly, the women who seek my help fall into one of three relationship categories:

Would you be surprised to know the women who have been widowed after enjoying a good marriage find love (again) much quicker and with far less anxiety?

I was kinda astonished at this!

These strong, magnificent women have been through such a horrible experience, yet most have far less hesitation about putting themselves out there again. Here’s why:

These women know the reward of having a loving, devoted man in their life. They know the splendor and security of grownup love. They miss the intimacy and partnership and don’t want to live their lives without it.

So, even after the tremendous pain of loss, they are much less content with staying in their safe, “my life is just fine” place. They are willing to do what they need to if it means finding love again.

I finally realized that the reward of being loved by a good man far outweighed the risks of getting out there and unapologetically looking for love.

You see, women who have been well-loved are not scared of dating because they know it leads to the ultimate reward: a partner in life.

That doesn’t mean these women aren’t scared as crap to be “on the market” again. They are just as afraid of getting rejected, being hurt or possibly even not meeting another man to love.

They are bummed that, at this stage in their life, they are single and have to put themselves out there.

Women who have been widowed have already been through a terrible emotional ordeal. They feel the fear and worry.

Lori went for it, fear be damned.

My private coaching client “Lori,” was in her fifties when her husband died, leaving her to raise her teenage son alone.

As scared as she was to date again after 20 years, she just couldn’t imagine living the rest of her life without what she had with her husband.

With him, she felt safe, loved and adored every single day. They were physically and emotionally bonded, and the very best of friends. He always had her back. And she his. They were a real team, facing life together.

Lori knew what the rewards of a good relationship felt like, because she experienced it for 20 years. It took some time but she had no doubt that she would go after love again.

She listened to me carefully about how to date like a grownup. (She hadn’t dated since she was quite young.) She learned to open herself up to men, and how to express who she was and what she needed to be happy.

Lori also learned how to talk to men about her loss, and make choices based on the (different) woman she now was.

I taught her how grownup men are different than the boys she dated before she got married. (Thank goodness!) I got her online and she dated several nice, but not-for-her, guys.

Then, Lori met “Steve” through friends. They have been together since their first date.

Their lives are complicated. They both have children and Lori is very careful about bringing another man into her son’s life. Still, both she and Steve are committed to trying to make it work.

And hell yes, she is still a little scared.

Lori still has times when the pain of her loss overtakes her. She worries about judging Steve against her husband. He is a very different guy than her husband.

But the feelings Lori feels and the rewards of their relationship are familiar in all those meaningful ways.

Lori had felt this security, passion, and partnership before, and that’s what she didn’t want to live without. It’s exactly what gave her the courage to Go. For. It.

It wasn’t overnight, but Lori’s found that spectacular love she was so missing.

I used to be scared of dating so I’d quit…often.

During my 30 years of singledom I never felt loved by a man. I was pretty happy with my single life and, like the women I now coach, the process of dating really scared me. (Not that I admitted it at the time. After all, I Was W.o.m.a.n!)

When dating got really hard, and my fear of dating became stronger than my fear of dying alone, I would retreat and go on dating hiatus.

There were periods of years between dates. During those times I would just keep repeating my ‘I don’t need no stinkin’ man’ mantra.

I told myself that I was better off without the confusion, rejection and potential heartbreak. That I couldn’t stand the hurt again…it was too damn much.

The act of dating didn’t seem worth it to me. Why go through all that pain? For what? My life was great just the way it was.

Months, sometimes years went by when I wasn’t even touched by a man. An accidental brush while walking past a man would seem so extraordinary. My entire body would feel it.

I thought I was being strong by choosing to stay single. I wore my strength and independence as a badge of honor.

At almost 45, I finally got it – the risk vs. reward scales began to re-balance. 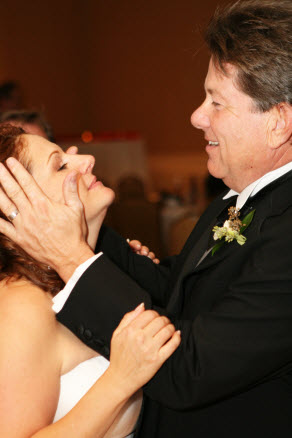 I was about 45, still super single, and still had no clue why. So I decided to seek a professional to help me figure out what was “wrong with me.”

With her guidance, instead of learning what was wrong with me, I learned what was right. And I finally admitted to myself that — more than anything else I could imagine — I wanted to love and be loved.

For all my single decades, the risks of dating seemed far greater than the rewards. With all the insecurity, self-doubt and false beliefs that I had, it was easy to retreat into “my life is good enough” and give up on the idea of having love in my life.

I didn’t know what being loved by a man looked or felt like. Before I met my husband in 2006, I had never experienced the kind of love that made me feel safe, cared for, and special.

I never had a man I could count on. I didn’t know what it was like to be anyone’s #1. I certainly never got anything close to that from a man.

With the help I found, I allowed myself to imagine being loved like that. I purposefully searched out women who were in happy relationships. (They were all around me; I just chose not to see them.) I started to believe it was real…and possible. I believed that I deserved it.

Unlike Lori, I had to imagine how it would eventually feel. But we came to the same conclusion: the reward of being loved by a good man far outweighed the risks of getting out there and unapologetically looking for love.

Once I understood how joyful love could be, I went for it like a dog with a bone.

I walked down the aisle as a first-time bride in 2006. I’m here on the other side.

The blush of early love is over. Larry and I have been married for 11+ years as I write this. We have been through a lot. It hasn’t always been easy or happy.

But we truly know each other, like and love each other. We’re equally committed to our lasting partnership.

If you’re like I was, and having trouble imagining what grownup love (the reward) looks like, here are just some examples:

I love being part of a couple – more than I even thought I would. I have a travel partner, a constant dinner date, a cute guy to snuggle with on the couch each evening and most of all, the security of knowing that this smart, fine man always has my back.

So, in retrospect, was this reward worth the risk I took of getting help, doing some things differently, and putting myself out there?

Was it worth the hassle of putting together a profile, answering some emails, going on a bunch of dates, feeling broken hearted a couple times and dealing with a few jerks along the way?

As my granddaughter would say, “Duh, ya think?”

Are you like I was? Do you sometimes feel overcome by the weight of the fear, confusion, and frustration of being single and dating?

STOP THINKING YOUR AGING BODY IS A PROBLEM! Get My FREE Guide

Well, I’m here to ask you…no, to tell you…that it’s time to get real about the risk vs. reward here. Is what you could have really not worth a few crappy moments along the way?

The first step is to acknowledge the fear. And then get out there anyway.

I want to hear from you! What are your thoughts on my risk vs. reward theory?? Which of the three categories are you in? Are you willing to finally “go for it” even though you have some fear?