Dirty John and the Lessons for Mature Women Dating 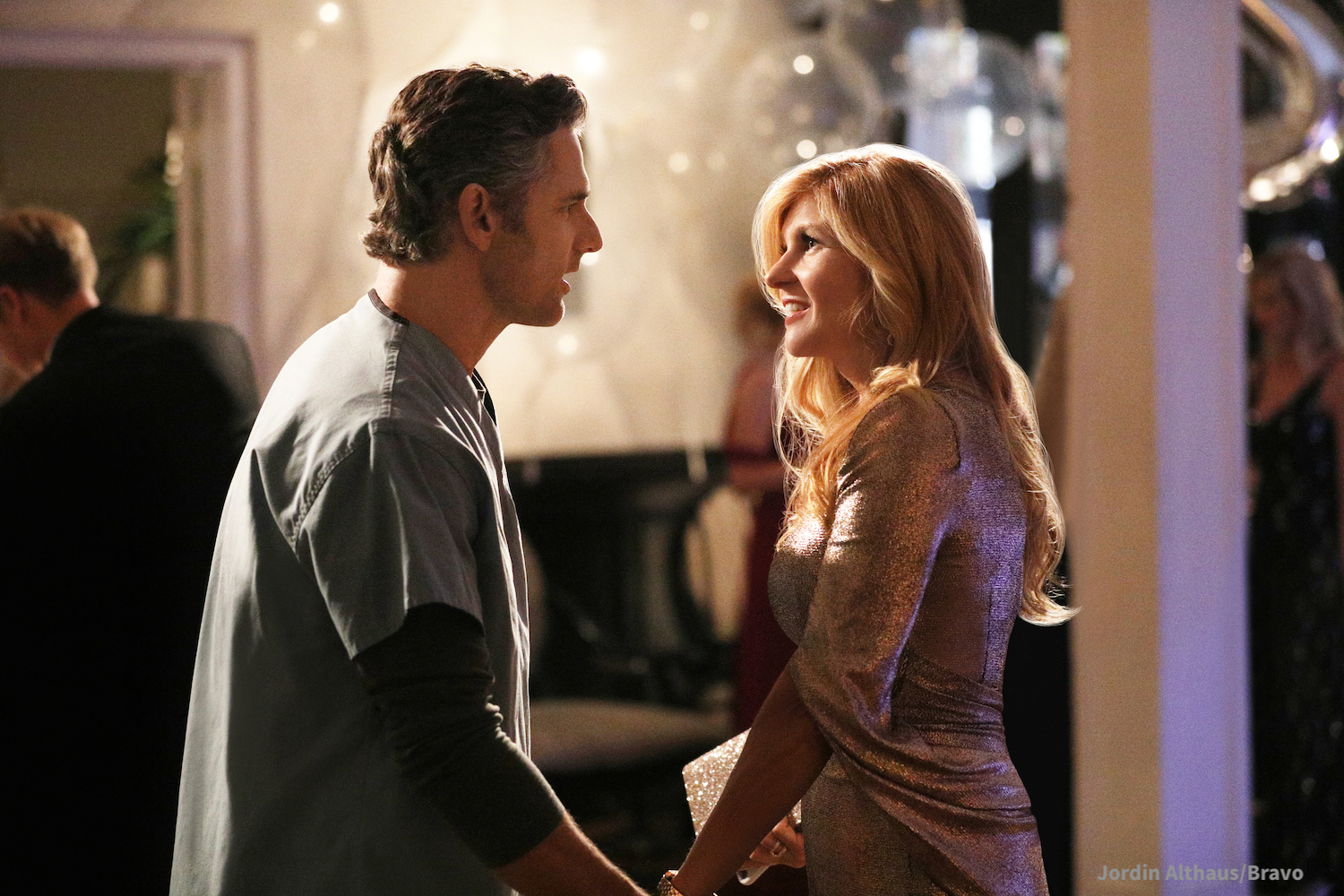 Dirty John was a podcast and is now a mini-series on Bravo about a middle-aged woman who meets a man online and enters into a whirlwind courtship. It ends horribly, practically destroying her and her entire family.

Dirty John is a cautionary tale, to say the least. What can a single woman over-40 looking for love using online dating learn from this true story besides having the crap scared out of her?

(But wait, before you do, I want to be clear: this is not a blame-the-victim story. This is me doing my job: leading you to your grownup love story in a safe and drama-free way. And hey, I set myself up for lots of Dirty Johns over my 30 years of singledom. It was sheer luck that I only fell for creeps, not psychos.)

During the montage, Debra is depicted as being grossed out by her date’s manners or drinking habits, turned off by their over-sharing, or mostly just bored to tears.

(Any of this sound familiar?)

John is charming, funny, sexy, good-looking, and so clearly into her. They have scintillating conversation, lots of laughs, and boatloads of chemistry. They are off to the races from date one.

We know this story does NOT have a happy ending. So, why does such a successful, smart, otherwise-confident woman with four marriages under her belt keep seeing this guy?

It’s because Debra is what I call a Wow-Me Woman.

The Wow-Me Woman is stuck in her teenage girl’s fantasy. Her surface feelings and intuition guide her. She firmly believes that one day her prince will come, they will lock eyes, and BANG…it will happen! She will just know.

Her prince will sweep her off her feet. He will be charismatic and charming and, upon first meeting, they will laugh, laugh, laugh! They will have all the same things in common. Their conversation will flow and be thrilling, with none of that pesky silence.

Here is how dating most often goes for the Wow-Me Woman:

She dates and dates but never meets men she likes. Once in a very long while, she meets someone and feels The Buzz. (You know, that chemistry thing? Bzzzzzz!)

At last, her prince appears.

Their first date is incredible.

He could be The One!

He instantly starts texting and emailing, and she jumps right in. They talk and/or see each other every day. He tells her how special she is. He’s never met anyone like her. He impresses her with flowery compliments, spectacular restaurants and musings of what they will do together in the future.

She’s more and more convinced that her initial feeling was right on: he’s amaaaaazing!

There is a huge difference between a good date and a good mate.

When I’m coaching her, she tells me: “It was incredible! I could tell right away that we had an amazing connection! I’ve been waiting so long to meet this man!” (I’m always tempted to reply, “How’s that instant connection thing working for you so far?”)

the story changes. Most often he disappears. But sometimes, like Dirty John, he sticks around alternately wowing her and showing signs he has very different – or very bad –intentions.

The Wow-Me Woman, once wowed, ignores any contrary evidence that they weren’t meant to be.

Nothing could convince her once she saw his charming side and decided he was The One she’s been waiting for all these years.

She’s kissed a lot of frogs and she’s not about to give up her prince!

If you continue to watch Dirty John you will see the horrible consequences of Debra ignoring an endless stream of even-thoughs. From the beginning, she threw away any rules, boundaries or healthy skepticism she likely applied to all those other (non-shiny) guys.

Look, we were all sold a bill of goods with the knight in white armor, happily ever after fairy tale crap. But as grownup women, let’s all agree to give up that fantasy. That’s the only way we can find lasting love with a real-life, warts-and-all, loving, high-integrity man.

…feeling safe, understood and valued…these are the yardsticks by which you can measure a man’s potential in a meaningful way.

Debra is a victim here. He was a nasty, criminal, pathological dude. But Debra let her desire to live out her Prince Charming fantasy blind her to the red flags he showed her from the beginning. (And once again, I get it. No stones being thrown by me here.)

if she had clear must-haves…

it’s likely that she would have run from Dirty John or never dated him in the first place. This story would have had a very different ending.

There’s a difference between a good date and a good mate.

Yah, the Dirty Johns of the world make for great dates. But there is a gigantic difference between a good date and a good mate.

A good date is momentary. Our grownup woman, if she’s looking for love, needs to look at whether a man has what it takes to make a great mate.

I was single for about 30 years before I became a first-time bride at 47. I know quite well that when we drive our love life by fantasy and feelings alone it leads to all kinds of tumult and bad decisions.

What I finally learned, and what I teach the mature women I coach, is that in order to be truly fulfilled in a relationship we have to be able to articulate the grownup feelings we need in order to be happy for a lifetime.

Charming and funny feels exciting. Having a man seem totally into you is incredibly powerful, especially when he comes in a shiny package. But feeling safe, understood and valued…these are the yardsticks by which you can measure a man’s potential in a meaningful way. After 12 years of marriage and watching countless women find loving, devoted partners…this is the real juicy stuff. The stuff that lasts a lifetime.

The mature dater sets clear boundaries to keep herself safe. She is clear on what she needs in a life partner. She knows exactly how she wants to feel when she’s with him AND when she’s not. (That “not time” is usually when the truth comes out. Pay attention to that!)

The mature dater knows it takes a lot more than excitement and Shazam to keep her happy. And safe.

The mature dater balances her head and her heart when making decisions about who to let into her life, into her bed and into her heart.

If you find yourself getting swept away and can’t articulate why (except to say something like “He’s just so…awesome!”), then tap on the brakes my friend. If this is truly a good man he will still be there when the grownup part of you decides he’s got what it takes for you to be happy as partners.

As Lori Gotlieb says in her book Mr. Good Enough: The Case for choosing a Real Man over holding out for Mr. Perfect: finding a guy to get real with is the real love story.

Life and love with a maybe-not-so flashy solid grownup man will make you so much happier than chasing after some elusive fantasy. (And catching one may be worse!)

So, if you’re a single mature woman dating and looking for love, I hope this helps you understand why smart women can make really dumb choices.

If Debra had dumped her need to be wowed, paid attention to her even-thoughs and judged Dirty John based on the grownup stuff, she would have avoided him and all the damage that ensued.

I have three principles that help women date like a grownup:

Debra scored miserably on principle #1 and #2 (she was kind to him but certainly not to herself). But she scored on #3. Debra ultimately took responsibility which included bravely sharing her story. By doing so I have no doubt that she has helped other women Just. Say. No. to going after the fantasy and finding the Dirty Johns out there.

PS: My Over 40 Love School is a 9-month program for mature women who want to find real love, are tired of the same old silly advice and are ready to get to work and get love done!

Get on the interest list for the next Over 40 Love School. We start in February/March 2019.