What to Do When The Man You’re Dating Says “No” 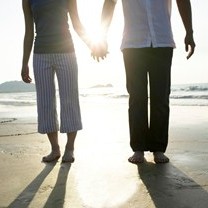 When it comes to dating, two letters that are next to each other in the alphabet have never been so negatively charged!

When you think about it, we probably say “no” more than a handful of times every day. “No thanks, I don’t want fries with that.” “No, I don’t want to switch cell phone providers.” “No, you can’t come back and live with me.” That’s a lot of “no’s” that we don’t think twice about saying, so why is it that when we get a “no” in the realm of romance, the word suddenly becomes weighted with all sorts of meaning?

For some reason when a man tells us no, even when we’re dating as grownups, we can feel that 16 year old ‘ickiness’ all over again. It can feel like he’s rejecting who we are as a person. And when that happens, and we start feeling that way, it’s a slippery slope to defensive behavior and self-loathing. And that is absolutely no good at all.

The fact of the matter is that when a man says no, he’s not saying it to hurt your feelings or to reject the woman that you are. He says no for the same reason that you say no to other things from day to day: it simply isn’t a good fit for his life at the moment.

I’ve said it before, and I’ll say it again, sometimes rejection can be just the thing you need in order to look at who and how you’re dating and, in fact, I think there are some men we should thank for rejecting us and helping us avoid a potential mismatch.

Now, don’t misunderstand me and think that I’m saying you shouldn’t feel hurt by rejection. Far from it. It’s a natural reaction and it’s OK to feel the sting a bit. What I don’t want you to do is wallow in the “no.”

Hear it, process it and move on. I’m here to tell you that there are plenty of men who are ready and excited to say “yes” to you and everything that makes you fabulous.

The next time a man you’re interested in doesn’t ask you out or the man you’re dating says that he doesn’t want to date any longer, don’t take that no as an affront to who you are. Take that no and turn it into permission to find someone who wants to say yes to a life with you. Because, hey, that no just took you one step closer!