Please Be Kind to Frogs 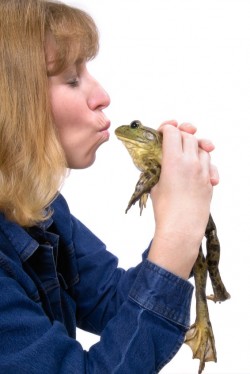 Think about the clever line we women often use: it takes some form of “I’ve kissed so many frogs I’ve got the warts to prove it!” or “How many frogs do I have to kiss before I find my prince?”

You know what I’m talking about.  It’s cute, and although we don’t really laugh at it, it tends to ease some of our feelings of disappointment and rejection. Let’s face it: after years of dating with no spectacular man to show for it, we have to tell ourselves something to help explain away the fact that we’re still “alone.”

So who are these frogs we keep talking about? They are all those guys who wasted our time because they ended up being boring or unattractive or unintelligent or just plain jerks. They are the men we were interested in but didn’t turn out to be quite who we expected them to be. They are the ones that lied about their height and their hair in their online profile, acted like they were interested and never called, talked about themselves incessantly and never asked a single question about your life.  You know these guys. Croak, croak!

So here’s what I want to share about this: this frog thing has to stop.

Men Are Just People...like you.

Granted, there’s always a jerk in the bunch. Larry (my spectacular husband) says “remember those idiot guys you met in bars when you were 22?  They’re still out there; just now they have gray hair.”

Yes, there are losers and jerks out there. But if you’re being completely honest and objective, weren’t most of the men you’ve met over the years just normal nice guys?

Looking back on my 30 years of dating — with some perspective and without the bad feelings — I see that most of the men I met were looking for affection, fun, and human connection…just like me. Like me they were sometimes insecure, secretly fearful, trying to avoid rejection, pained by past experiences, and disappointed in the people they had met so far. And, like me, they sometimes reacted to their disappointment with callousness and selfishness.

These guys were all just like us; out there hoping to figure out how to find someone to love and to be loved.

I know the frog thing is helpful when we feel rejected, or when we try to find an explanation for why no man has yet to be The One. But the sooner you break down your protective walls, throw away the blame and judgment, and just see them as nice folks out there navigating the dating waters Just Like You…the sooner you’ll start having more positive dating experiences.

As long as you see these men as frogs, and not as nice guys who weren’t or aren’t your match, my guess is you will continue to feel like you’re meeting those jerks that hung out in the bars.

So here’s some advice: knock off the frog nonsense and go out in the world with your kindness and compassion front and center.  Approach every man you meet as a nice guy who, like you, is out there looking for a good time, and hopefully love. When you do, I promise you’ll meet more nice men who meet your positive expectations.