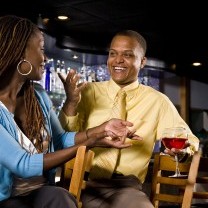 Once again I’m addressing the basic question: Where do I meet single men? But it’s actually a little more. What if a good lookin’ single guy is standing in front of you? Then what do you do to actually get him to talk to you?

It’s actually easier than you may think.

When you’re buying groceries, at a business seminar, on your daily walk… single nice men are everywhere! You can meet these guys by simply approaching them in an open, kind and friendly way. This makes men feel good. It can rock a man’s world! Which, in turn can rock yours, right?

You see, this doesn’t happen often for guys. Most women don’t have a coach constantly nagging her to approach men; so women just sit back and wait for men to make a move. And men continue to be the ones risking rejection.

Imagine how nice it is for a guy to be the one receiving attention and interest! Imagine how he feels when a woman makes it just a little bit easier for him by signalling “if you ask, I”ll say Yes.”

I know it’s hard to put yourself out there. I know it’s not what you’re used to. I know you don’t want to risk feeling rejected. And you may even still be stuck in the “if he’s a real man he will make all the moves.”

Well…you can continue to sit back and wait, or you can try to make things happen for yourself. Gotta say it: how’s that sittin’ back thing been working for you so far?

In today’s post I’m making it easy by giving you a script. I’m also giving you a great tip that came from none other than my fabulous husband.

You’re in Starbucks and the man in line behind you is cute enough. (Or not…but you can use him as practice. He will still be flattered.)

You give him a nice subtle smile and look into his eyes. Even just for a moment.

You say: Wow…I can’t decide whether I want a hot or cold coffee right now. (Note: your opening line doesn’t have to be clever or brilliant…just friendly!)

He says: It’s pretty hot, I’d go with cold. (Don’t worry if he doesn’t immediately react or light up. He may be surprised or otherwise focused.)

You: I agree with you, thanks. (Men love hearing you agree with them. Means you think they’re smart.) What are you today: cold or hot? (Okay, now that can be a little double-entendre…which is great! This is called flirting.)

You give a little bigger smile.

You: Are you taking yours to go or drinking it here? (You are clearly showing interest in talking with him further. Yes, it’s scary. Men have to do this all the time. You can do it.)

Him: I’m drinking it here.

You: Would you mind if I joined you for a few minutes? (Not overly pushy, and you are letting him know you’re not going to put a stranglehold on him.)

Him: Sure. (Again, don’t be bothered if he seems surprised or a little put off. This is probably new for him. And he may be married or gay or having a bad day. It doesn’t matter. You’re not asking him to have sex with you for goodness sake so there is nothing to be embarrassed of even if he says no.)

He says yes and you talk for a few minutes about the book he’s reading, whether he likes Mac or PC, or if he has any fun plans for the weekend. You do NOT ask him what he does for a living. You do not self deprecate or shrink if he disappoints or doesn’t end up wowing you. You make sure to drop in an intriguing or meaningful nugget about yourself and show how confident, kind, fun, and open you are. And you use the “I” rather than “we” to let him know you’re single.

When it’s time to go your own ways, or after 10 minutes which is long enough in case he wants alone time:

You: It was fun talking with you. It would be nice to talk with you again some time. (If you have any interest you must add the second sentence. If not, just say the first. That’s just manners; everyone says that even if they had a terrible time.)

Then…you don’t say another word. Don’t freak out and start backing out of your comment. Just wait. He’s either going to say Yes or No, right? No means he’s got a girlfriend, he likes men, he likes women who are somehow different or he’s on dating hiatus. Whatever, don’t assume it’s about you not being “good enough.” It’s not. And besides: you just proved you’re a fierce woman who can go after what she wants!

Ask and let him answer. Like they say in sales: ask for the sale and then shut up.

When he says something that sounds like a yes, if he doesn’t follow with “give me your number” simply dig in your purse and give him your dating card.* Then smile, look him in the eye and say Fun! I look forward to hearing from you.”

If at any point along the say he gives you a “no”…so what. Give yourself a big atta-girl for having the courage and smarts to do this, and know that the next time you’ll likely get a “yes.”

* What is a Dating Card? In one of my Man Panels where I ask over-40 single guys questions about dating, relationships and sex, the guys brought up that the logistics of getting a woman’s information when you are out and about can be challenging. You can’t go searching for a pen and a napkin.

You want to be able to make it easy, but you don’t want to give him your business card; he is a relative stranger. (That’s why when you go out with him the first time you meet him somewhere.)

So…Larry suggested that you give men a Dating Card. You can have it printed at your local print shop this weekend! It’s fast and costs next to nothing. Put your name and email, or phone if that’s your preference. Maybe put a nice quote that you like (that guys will also appreciate). Make it a bit girly to show your feminine side.

And btw: if you’re concerned about him having your phone number, get a GoogleVoice account. You can give him that number and have it auto-transfer to your number. It keeps it private!

Worried it might seem too presumptuous to have these cards? Once could say it simply seems confident. Your call.

Hope this helps ladies. Now go out there and get some practice. Remember you don’t have to wait to do this with some man you’re hot for. Try just striking up conversation whenever you can, okay? You don’t have to share your info if you don’t want to. It’s just good practice for when you want to feel good about doing it with the right man.

Go to my Facebook Page and tell me how it goes, okay? Share your tips. We all want to hear about it.