Stop Being So Damn Scared of Your Fabulous Self 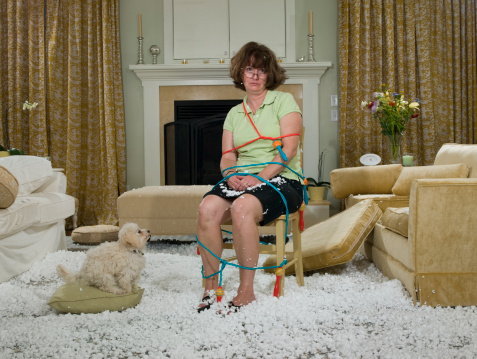 Two new clients this week shared stories about their past dating and relationships, telling of how they stayed with men who made them unhappy. These otherwise smart women tried and tried to be who the men wanted them to be, but it never worked out. Now, looking back, they are kicking themselves for staying so long. Those men were not only wrong for them; they were cads.

For them, I wanted to repeat this post from last year about how we, as women, try so hard to rearrange ourselves into someone else…just to get the guy. And how it never turns out well.

I believe this statement is generally true:

Women can twist themselves like a pretzel to please a man and persuade him to adore her.

When you are just being yourself, that’s a turn-on. It signals confidence, which is very attractive to mature and confident men.

My friend Pegi reminded me of this the other day. While she was having dinner with a new man she was interested in, he told her that he wanted to date multiple women at this time in his life. She asked me “What should I have said?”

My immediate response was “What do you want? Do you want to date a man who wants that?”

Allow me to deconstruct my thoughts about this.

Now…your turn with this. Think about the last time a man told you something about himself that you didn’t like. What was the immediate conversation in your head? (C’mon…it’s a known fact we all do over think this stuff.) Was it Do I like this about him? or Is this what I want? Or was it about him, what he wants, or whether your willingness to accept this would make him like you more?

There are three fantastic payoffs of staying grounded in who you are and confidently being that person on every date.

On your next date, commit to practicing this. Just stay aware, and be your real, true self. I promise that on your way home you will feel 100% better than you did after your previous 10 dates.

Oh! And here’s what I think Pegi should have said: “Thank you for telling me that, Bob. That’s different than what I want in my life right now. I appreciate lunch, but we won’t be a good match.” And then she should have never looked back.