LOVE PROGRAM It’s REALLY NOT the Size of Your Thighs: Your “There to Here” Big Lesson #2 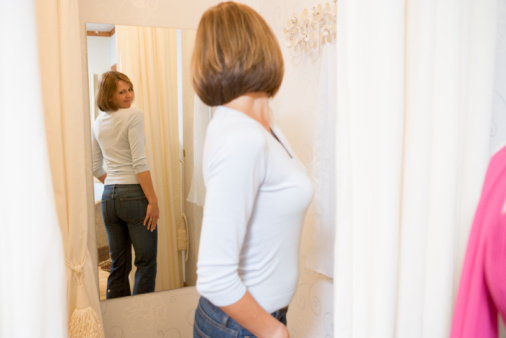 I’ve been sharing some of my personal journey and exactly how what I learned can lead you to the love you so want. I know these posts are long but I SO hope you take the time to read. Click here to read the previous blog post.

Oh, and one last thing here: It’s my hope that through sharing my very personal story I am helping you understand what’s blocking your way to love. If you are feeling more ready, open and excited to bring love into your life, and wondering what comes after this (aka you’re feeling great but NOW what do you DO??) –  I have you covered. Stay tuned to learn about my new, very special new Love Program where I will personally guide a handful of women through everything else I learned that led me to my grownup, wonderful love story.

This is part three of sharing my very early journey from an “I’m happy, but…” single woman to an “I’m happy (period)” married woman.

So today, I’m going to share another of three ginormous, simple steps that sparked extraordinary positive change in my life.

My hope is that I help you open YOUR mind, open YOUR  heart and get you off YOUR butt! (Or help you stop doing the same thing over and over and expecting different results.)

From my last post you know that at about age 45 I sought out an expert to help me figure out why I was still so damn single. One of the things my teacher asked me was why I felt so stuck on making the distinction between needing a man (no way!) and wanting a man (that was ok).

When I gave her question thought, I came up with a explanation that surprised me. I initially figured it was the “I am woman!” so I don’t need a man thing. But it wasn’t.

Facing the truth led me to the realization that…

I was trying to protect myself from the awful possibility that I would never, ever feel loved by a good man.

When we NEED something, the pain of not getting it can be devastating. But when we just want it, well…we’d be okay if forced to live without it.

So my first “there to here” big lesson was this: Yes, I DO need a stinkin’ man!

I hope you’ve joined me in being able to say this loud and proud. Out it out there, unashamedly. You deserve it!

I started liking boys at age 12 and I must say that I snagged some damn cute ‘boyfriends.’ Steve, Kelly, Dennis, Danny…all super hot and popular. And for a moment in time, they were each mine.

Then, somewhere around age 16, something changed. I can’t pinpoint exactly what, but I’m sure it had something to do with my body filling out. All of the sudden there were no more cute boys for Bobbi. No more boys at all really.

I was short, had big thighs and a typical Jewish girl sized butt. I presumed boys looked the other way was because I wasn’t cute enough. And I felt that was confirmed when, over the years, no one wanted to date me or be my boyfriend (except a few really dorky guys).

In the 70s, this was reinforced by some of the women’s movement dogma: Men are shallow and only think with their small head. Men don’t respect women, and only want sex. Intelligence and substance in women are turn-offs to men.

For decades this was my truth: I’m too smart, too short and too fat. Men don’t want a woman like me. That’s why I’m still single.

And, oh geez…then I started getting older and older. And I was just piling on more of what (I thought) a man would never want. I was carrying a bunch of extra pounds, was over 40 and never married, had addiction and a multiple sclerosis diagnosis behind me, a daily boat load of mommy drama and a successful career in which I was the boss lady.

I figured that did me in with men! I was everything they didn’t want! No wonder I was still single!

If only I had gotten my shit together when I was younger. If only I could lose weight. If only men weren’t so damn superficial and visual and they could care just a little more about what’s inside.

When I finally reached out for help at 45, I figured that I only had a tiny, infinitesimal chance to find love. All the good guys were taken. I felt sad and kinda embarrassed that I didn’t figure all this out in time. And that I couldn’t lose the weight. And that men were jerks. So who wants them anyway?

Now, my next transformational “ah-ha” moment is coming…so listen up.

After years, no decades of believing this truth, my therapist/teacher set me free. And it was SO SIMPLE! (Not necessarily easy, but damn simple.)

My therapist, my teacher, who provided the insight and accountability I so needed, pointed out that two things were going on here.

What I believed to be true was NOT, and there was incontrovertible evidence all around me.

My teacher, Anne, forced me to take a long hard look at the women I knew who were married or in a committed relationship. I didn’t have a lot of friends who were coupled, but I had family members and people I knew in the business world.

Were they all beautiful, thin and young? [To me they were beautiful. But they certainly didn’t belong on a magazine cover. And they were all ages; many in their 50s and 60s.]

Did the men I know show respect for their really smart, average looking partner? [Yes. Clearly.]

Did they want to hear their woman’s opinions and were they proud of their accomplishments? [Yes, with the occasional exception of a man showing a little insecurity.]

I then was told to look around at couples I didn’t know and could only observe. Do that for a few weeks, she said. How were they with each other? And what did the women LOOK like?

I saw women of all shapes, sizes, ages and levels of accomplishment who were coupled with men who paid attention, showed affection and seemed genuinely happy to be in their company.

Their men seemed kind. They were accommodating. They wanted to make their woman happy. They were attracted to her and desired her. A lot of couples were laughing together. 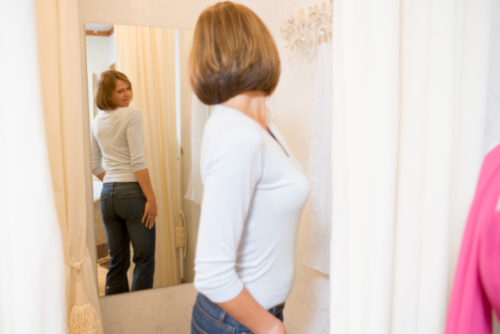 Many of the women I looked at were with men who, at first, I considered ‘not good enough’ for me to date. But after I paid attention to how the men treated their women – which I had never done before – their men started looking quite appealing. Yep, I’d date them for sure!

Next, Anne gave me one more big ah-ha:

Holding on to the “I’m not good enough, men don’t want me” belief was yet another way I was giving myself a get out of jail free card.

When I believe that men don’t want a fabulous woman like me because men are all such jerks, then I get to ask myself: why try?

Arrrgh! She did it again.

As Gloria Steinem once said: “The truth will set you free, but first it will piss you off.”

This exercise actually did piss me off. And it made me really, really sad.

All these years of believing that men didn’t want me because of how I looked, how old I was and how smart I was…it was not true.

Not only did having that belief give me an almost life-long excuse to stay single, it ultimately affected my behavior around single men in a really BIG way. If they didn’t want me, why try? Why take the risk of being hopeful, putting myself out there and being vulnerable to their rejection (which I ‘knew’ would come)?

I know now that even though I thought I was trying for years, I really wasn’t. (You’ll hear more about that in the next and last part of this story.)

Remember in my last post I talked to you about self-fulfilling prophecy? I was LIVING that for literally decades! Until my teacher gave me the opportunity to look at contrary evidence, I held on tight to the belief that men sucked and I was too fat and too smart to be loved.

It was my truth…and I (unconsciously, I believe) did all I could to be right about it.

Being right is not always what you want to be.

Can You See This Helping You? Here are Your ‘Hows.’

I want you to do the same exercises Anne gave me. Observe the couples in your life, as well as those just out and about.

Are the coupled woman you know dumb or are they smart and even successful?

Are they all beautiful, thin and young?

Do the men show respect for their women?

Did they want to hear their woman’s opinions and are they proud of their accomplishments?

Then, look at the couples you don’t know.

What does the women LOOK like? I want you to RATE HER APPEARANCE on a scale of 1 (yuck!) to 10 (a freaking model). What is the average? What are you seeing?

Are only beautiful women with men who love them?

How are they with each other? How is the man treating and relating to the woman?

Lastly, if you relate to this belief, consider whether you have used it to give you an excuse and ask yourself:

HAVE YOU TRIED IN ANY INTENTIONAL, MEANINGFUL WAY TO BRING LOVE INTO YOUR LIFE??

I tell you my story about being single and meeting my beloved, not to brag, but to empower you! If I can do it, and so many of my coaching clients can do it, so can you!

There’s Jeanine who was 47, size 24 and never married. She thought she was never going to find a man who wanted a “fluffy old-maid.” She met Ron online and married him last year and is now a wife and step-mother.

And Maria who, at 52, was between jobs, a little overweight, never married, with an 8 year old son. She figured her “baggage” left her undesirable. Well, she was also interesting, loyal, kind and had a great smile. Paul dug her, baggage, kid and all. They married and the three of them are happily living in Toronto.

Like I, Jeanine, and Maria have done, you too can learn some new truths that will open up gigantic new possibilities…not just for bringing the love of a man into your life, but for LOVING YOURSELF AS THE DESIRABLE WOMAN YOU ARE.

Your value as a woman is tremendous. And grownup men are looking for a woman like you.

I want to hear from you! Do you truly see yourself as a woman a good man would want and desire?

Please share your thoughts, feelings and what you learned going through the exercise.

Next, I’ll share My “There to Here” Big Lesson #3: Just Be Yourself and You Will Easily Attract the Right Man, coming soon!