How to Spot the Bad Guys and Chase Them Away 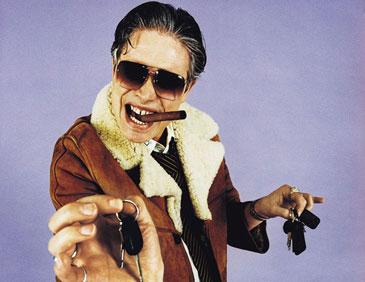 Do you want to be in a relationship with a man who doesn’t care what you want and need?

I’m going to assume the answer is “no.” So I have to ask: Why would you date a man who doesn’t care what you want and need?

Two of my private coaching clients are struggling with the notion of communicating their needs and desires to the men they date. Most of my clients have this challenge. I know I did.

We think that if we share what we want, the guy will think us pushy and selfish, and leave.

My client Alison’s past history goes something like this: she does anything and everything exactly the way he wants, bends until she almost breaks, and when she can’t stand it one more day…she voices a preference.

Maybe it’s to choose a vacation spot. Maybe it’s asking for a commitment after years of dating. Maybe it’s simply asking to be treated with more kindness and respect.

When she’s done this, the guys have hurled insults, increased their controlling and selfish behavior, and soon after ended the relationship.

Now that Alison is working with me, she’s aware of this pattern. With my support she is meeting men via Match.com. I’m encouraging her to take control of the experience, which starts with letting men know how she would prefer to move through communications.

Not in a demanding way, but in a way that tells him what will please her…if he chooses to do it.

Here is Alison’s email to me today:

A guy emailed me with “Hi.”

I emailed back with a short note asking for communication.

He emailed back with “let me know if you’d like a call sometime.”

I emailed back that I would like that at some time, but for now “I

would be very happy to get to know you a bit on email – is that ok with you?”

Now, if I were to look into my past experience…..I would tend to

say that I asked for something, and the immediate response was that

the other person left.

Here is my response:

Yep. He did leave. And isn’t that GREAT?

This is a guy who wouldn’t even do this little thing she asked. Good thing she learned this now, rather than after doing everything his way for months or years and getting stuck in her old pattern.

It’s true that a “no” may not mean he’s an awful guy. Maybe he just doesn’t see things the way you do. Regardless, if he refuses to do something that is important to you, then he’s not for you.

This isn’t a test and it’s not about always getting your way. It’s just about kindly communicating when you want something that is significant to you.

If he won’t do these things now…he won’t ever.

So Alison asked me: Are you telling me that you want me to chase men away? And my answer was: Men like this? Hell ya!

And by the way…

My other client Kathy wanted to dump her guy because he was getting too intimate too fast. We worked on how to communicate that to him in a non-demanding but clear way. He was a nice guy, and it was worth a try to see if he would agree.

She had that conversation just as we practiced it. He told her it was quite fine with him to slow things down. And he thanked her for telling him what she wanted.

And he asked her out for the next weekend.

I rest my case.