Six Reasons You Should be Making Small Talk on Dates 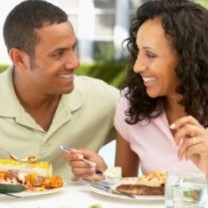 When you’re dating, especially if you’re over 40, you probably want to know as much as possible as fast as possible. Why waste your time, right? Especially those of us who are “of a certain age”; life is too damn short to be dilly dallying around to get to know a guy. Either he’s for you, or he’s not.

You’d rather check out his appearance, feel out the chemistry, spend 5 minutes talking about the weather and…if you’re interested…get to it. Why did his marriage break up? Is he close to his Mother and children? What’s up with his career? Does he share your political/religious/moral views?

I get it. I’ve been there. But the truth is that 9 times out of 10, this will not serve you well. Because not only does chatting tell you a lot about someone; when you’re not chatting you’re probably doing something you ought not be doing.

1.  Like you, men can be nervous, self-conscious, and even insecure. (Does that surprise you?) Idle chatter lets you settle in, get comfortable, and get a sense of each other. This can take some time – maybe the entire first date – but for the right guy it will be worth it.

2.  Talking about non-consequential – i.e. non-threatening – topics will bring out his fundamental personality. You’ll see clues to his intelligence, well-roundedness, sense of humor, lifestyle, and general interests. This is the stuff you’re going to live with every day, and it’s important.

4.  Context is huuuuge. Finding out about his illness or his bankruptcy on the first date will most likely send you fleeing. But what if you found that out after learning he was kind, confident, brilliant, and generous? (This goes both ways girlfriend. Hush until it’s right.)

5.  Contrary to most women’s opinion, asking him about himself and then letting him talk endlessly is not a way to attract him. While grown-up men certainly look for deep connection in a partner, “someone who will hear my deepest thoughts” is far from first on their list.

6.  Your femininity is a man magnet. He needs time to “drink you in” and get a sense of that part of you. When you’re grilling him – and that will be his perception – trust me girlfriend, to him you are not in your feminine. (Or at least the part they like about it.)

So, when first getting to know each other, talk about what you like to do, where you like to vacation, where you’ve lived…this is where you should stay as you Date Like a Grownup™. Get a sense of his personality, intellect, and manner…and let him see yours.