Meeting New Single Men: Don’t Blow It By Doing This 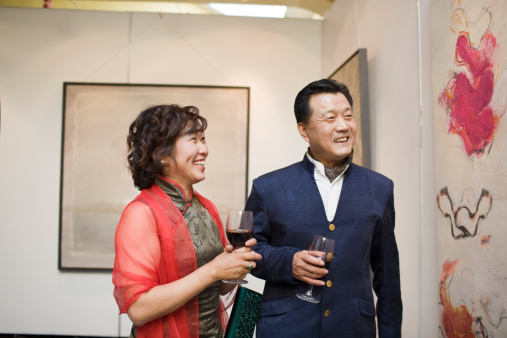 It seems to me that the older you get the easier it is to get off on the wrong foot when meeting new single men. He’s nervous, you’re nervous. You both have decades of expectations, baggage, hopes, quirks, defenses and vulnerabilities. It can be damned hard to wade through all that in the first few minutes and actually make a real connection.

Before you write him off, that is.

Real connection is what you both want. (Yes, most men want the same thing you do. To believe otherwise is just buying into a stale myth.) My question is: are YOU truly giving it a chance? 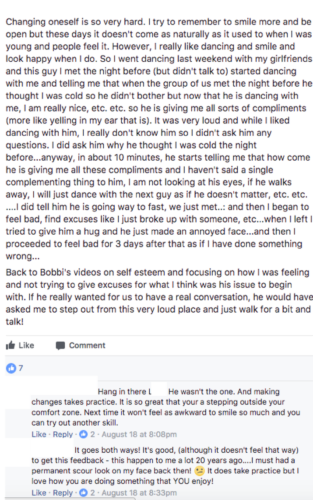 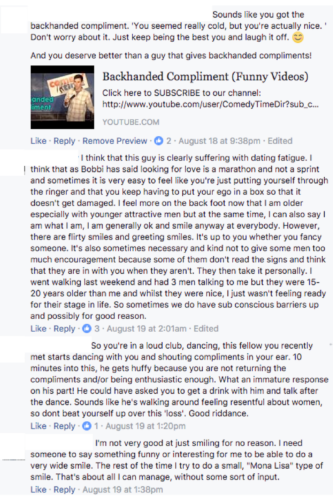 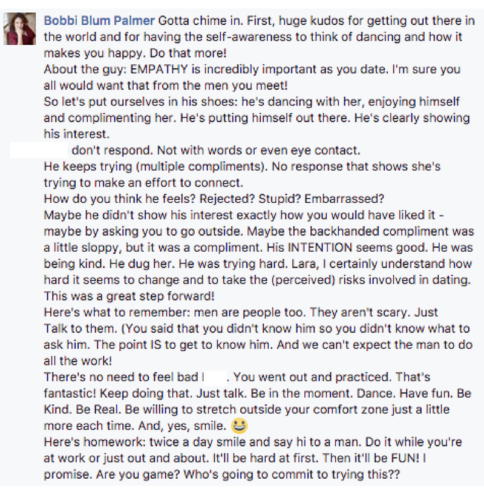 Okay…first I want to emphasize that the woman who authored this post deserves huge kudos for forcing herself out of the house. Sometimes that’s what it takes. (I know. I spent many nights on my couch telling myself to get up and go out…but didn’t.)

Unless you’re into the pizza delivery guy you have to do what it takes to get yourself out among people. That’s the only way you’ll ever find Mr. I Love You. So she was courageous as well as wise by thinking of what she likes to do, and going to do that. Great move!

Like she said, changing oneself — in this case learning to date like a grownup — is like anything else you’re tried to do differently in life. You start by learning new information and shifting negative perspectives. Then you have to practice. Isn’t that the key to mastering anything? So again, huge kudos

Now…let’s talk about how she handled the man thing. And how the other women responded by going after him and what he did wrong. (He’s immature. He gave a backhanded compliment. He’s obviously not right for her.)

This man was obviously into her. He put himself out there. He complimented her. He did his best in the situation. He received no points for any of that. Not a smile. A thank you. Eye contact. In fact, he lost points because he didn’t do exactly what she would have wanted him to do: ask to go outside. My take: it’s likely he felt that was too forward. Or maybe he was going to ask once the song was over. Who knows? Neither of them got the chance to find out.

Maybe he was a jerk. Or way oversensitive. Or controlling. Maybe he was an ax murderer. Or maybe he was a kind, smart, generous man who was attracted to her and clumsy in how he showed it?

I want you to take advantage of every opportunity to make a connection that comes your way! That’s why I work hard to help educate you on what grownup men are like, what they really want and what they need from you to bring out the best in them (and yourself).

It’s not uncommon for men, especially if they like you, to talk too much on a first date. Or to ask you some downright awkward questions.

And this one is really BIG: It’s not unusual for a grownup man to walk away if he thinks he has no chance of winning with you. Confident, accomplished men who are looking to make a meaningful connection with a woman won’t chase unless he gets something back. If you’re into the guys who are relentless pursuers, get used to being ghosted. These dudes wow you and then disappear. You can read more about this and other ways grownup men are delightfully different than the boys you’re probably used to dating. https://datelikeagrownup.com/the-difference-between-dating-men-and-boys/

You can read more about this and other ways grownup men are delightfully different than the boys you’re probably used to dating.

Here’s a suggestion: take all that time and emotional energy you put into being mad at men or disappointed by them and put it into learning about them and trying to understand them. I promise that it will make you a ton happier and a lot less single.

And btw, my FB friend could have yelled in his ear something along the lines of “I’d love to give you a compliment but I don’t know you yet. Maybe we can step outside after the dance for a few minutes.” It’s OK to ask for what you want. If she had, I guarantee you that he would have been delighted.

I want to hear from you. Do you think you’re guilty of harshly criticizing men or maybe expecting them to ‘treat you’ a very specific way or you assume all kinds of things about them? Or do you go into meeting new single men with an open mind and open heart, being in the moment and enjoying the discovery of who this new person (aka new opportunity!) is? What are your thoughts on this?

PS: Before you write about how men do this to women all the time, I’ll save you. YES, they definitely do. But I don’t coach them, I’m here coaching you. You can’t control what they do; only what you do. So I’m going to keep helping you take care of yourself by teaching you how to make positive changes. That’s my mission, my sister.