How to Grab His Attention Without Saying a Word! 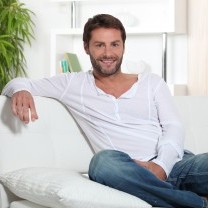 For years I’ve told you that the most powerful way to attract a man without saying a word is with your smile and your eyes. An open welcoming smile and brief lingering eye contact are two signs that let him know he can approach you without the fear of being rejected.

Doing these simple things can set you off on a whole new life journey. No kidding…I know couples that are deeply in love and it all started with a glance and a smile.

In preparing for my The Art of Magnetizing Men Live Event this weekend, I’m gathering a lot more “moves” for you to make and ways you can tell when he’s making the moves on you. I thought I’d share a few today.

Here are a couple more simple signals you can start using right away:

While you are talking to him or he is looking at you, touch your hair and your face. It’s the oldest “trick” in the book…but it works! This says to him “Look at me!” Also, “I’m touching myself, but I’d really like you to be touching me.” (Don’t worry; it’s all subliminal. He won’t get that direct of a message.)

Why is the hair thing so effective? In cave man days the condition of a woman’s hair was an instant sign of how healthy she was. That meant she was a good baby-maker. Flipping your hair says, “Look at me, I may be a suitable mate for you.”

Caution: Be careful not to pull, or twist your hair because that can be seen as a sign of nervousness. Just a gentle touch or toss will do the trick!

Exposing your neck is another way to say “I r-e-a-l-l-y like you.” The neck is a well-known erogenous zone and exposing it to him is speaks volumes. It tells him you are open and you trust him. If he is at all interested, you will surely get his attention.

Now, how can you tell if he is in to you? There are a million ways, but here are a few you may not already know:

If a guy spreads his legs and turns towards you, he’s expressing his attraction to you. Now, I don’t mean the sleazy raincoat wearing, flashing kinda thing. I’m talking about the subtle,” I’m a man who wants your attention” stance like the guy in this photo. Besides being totally hot, his open legs and arms are welcoming you. It’s not scary, right? I know I’d take a second look. (Sorry honey.)

Those of you enrolled in this weekend’s Mastering the Art of Magnetizing Men will learn tons more of these tips and tells. Witty banter and clever conversation take a back seat to the most powerful language of all: body language.

Go out this weekend and practice using the face touch, hair flip and neck exposure (sounds so scandalous!) on any cute guy you see. And start observing men and their moves. Let me know how many wide-eyed raised eyebrow expressions you get in return!