4 Ways to Get His Attention Online or Out and About 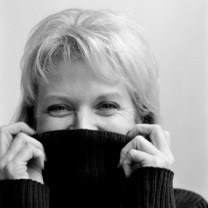 No matter your age, the way to connect with a man in the “I think you’re hot and would be interested in going out with you” way is to flirt. It’s as true online as in person; flirtation isn’t about being a tease, it’s about showing your interest and curiosity – and piquing his.

When I suggest that to the mature over-40 single women in my dating workshops and coaching programs, I can see them cringe. Most of these otherwise outgoing women have no idea how to flirt with men, nor do they want to. They consider it quite childish, bordering on classless.

I have news for you: Here is what you get when you don’t flirt with nice men: a nice conversation. That’s it. You’re likely to stay in the dreaded friend zone. That means online you’ll never hear from him again, and offline he might ask you for lunch; but that’s all you’re going to get.

Now don’t get all ruffled about the sex thing. Isn’t this just like you? When you’re attracted to someone you usually imagine hanging out with him, kissing him, holding his hand (that was me) and/or jumping into bed. Men are pretty much the same, though they may skip the other stuff and go straight for fantasizing about the sex!

Here are four ways to flirt with flair and class – whether online or off – so you can get him to go past the conversation and ask you out again and again:

Have you ever noticed that we use compliments to connect with other women? “I love your purse!” “Your job sounds amazing!” “You crack me up!”

You can tell him he has nice eyes, and he’ll appreciate it. But that won’t go so far as more substantive compliments. A confident, grownup good guy needs to hear more than you think he’s cute or you like his dog.

Tell him you agree with something he says; ask his opinion; let him suggest a book or restaurant; tell him you appreciate his jokes or that his business sounds interesting. Tell him you want to know more about something he’s interested in. When you’re online, pick something that stands out to you that the other thousands of women may not. Saying you like his dog is what every woman says. Instead, tell him you think it’s cool that he’s an engineer and ask him what he likes to create.

Men rarely receive compliments from women. When you do, you will stand out and he will take a second look. And if he doesn’t end up asking you out, at minimum you helped a nice guy feel good about himself. You do that for other women all the time, right?

2. Bare bits of your sweet soul!

Write like you’re chatting with him. I recommend that my clients ask and answer this question out loud: What do I like about him and what do I want him to know about me? Then just have a little conversation with yourself. This helps you get the words out so you can communicate in a genuine and open way.

When you write, let him know some real stuff about you. Share a funny or embarrassing thing that happened to you today. That tells him that you’re willing to be open and not take things too seriously. (Those are attractive qualities, don’t you think?) Tell him that you’re excited about taking your niece to the park and swinging on the swings with her. Tell him you’re studying French because you have dreams of going to Paris. Don’t make it only about your accomplishments and how perfect your life is. That’s not the stuff that forms bonds between people looking for love.

This may be difficult for you; it is for many women. We aren’t used to talking about ourselves because we’ve been told it’s selfish and braggadocios. (Love that word!) Real ladies are humble and let the man shine, right? No. It’s nonsense.

You’ve got to get over this if you want to help men get to know you. They want you to talk about yourself! (At least the good guys do.) He’s only going to know how fabulous you are – and if you’re a good match – if you get some of your shiny stuff out. Don’t be afraid to share your passions, interests, accomplishments, interesting life experiences and plans for the future.

You will get attention and get dates by showing the confidence to tell him who you are. You will be memorable and may be just a bit enticing. A warning though: as my husband says: Men listen in headlines while women talk in stories! Don’t tell him long stories. Keep it brief, and if he’s a match for you, he will want more.

Whether online or off, it’s important that you show real and revealing glimpses of who you are and what you care about. The right guy will be drawn to you, and the wrong guy won’t. Isn’t that perfect?

A simple: “Nice talking to you” isn’t enough. Everyone says that, and it’s likely to be filed under the “she’s just being polite” category. Instead, add something to that. “It was nice talking to you, Bob. It would be nice to do it again.” That makes it clear that you’re open, and it shows that ever-attractive confidence. (You can apply this every step of the way: It was great to get your email, Bob. I look forward to continuing our conversation…and so on.)

There’s a big difference between this and asking him out. After you deliver this line, stop! You have helped him feel safe and appreciated. He knows you will say yes if he asks. (Men really do appreciate this…just think of how many times they’ve heard “no” in their lives!) If he’s interested he will make a move.

One last note: Remember that if he doesn’t go for your attempt, he probably knows something you don’t know about why you’re not a good match. (He wants someone taller, is obsessed with something you don’t like, sees his last horrible girlfriend in you, etc.)

Don’t fall into the trap of thinking flirting is tacky or that you can’t be good at it. Flirting is definitely for mature daters; we just do it a little differently. Even if it doesn’t come naturally, there is hope! Use these techniques and enjoy the positive responses you get and the power it gives you. (Yes..I said POWER). I’m confident you’ll go from thinking of flirting as a necessary evil to looking forward to the next opportunity to strike up a connection and share yourself with a nice man!